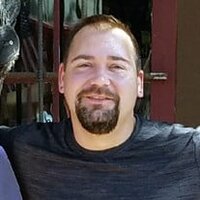 "Joshua was born in Panama, Republic of Panama on January 15, 1980 to Debbie Virginia Wyatt and Douglas Wayne Long. His father was stationed in the Panama Canal Zone during the time. He started walking at 8 months old because he knew he would accomplish great things. He lived in many states after he was born. On the way from California they stopped in Arizona to visit the Grand Canyon which was no accident. He joined the Army National Guard when he was 17 years old, then after he enlisted himself in the Army when he was 19 years old. While he was stationed in South Korea he worked at the demilitarized zone. He always said it was cold there and nobody should ever go there. Sadly, Josh was taken from his beloved partner, family, and friends unexpectedly on April 18, 2021. He also leaves behind his dog named D-O-G. Describing Josh in a few words, he was a dedicated mentor, philanthropist, decade-long veteran, and a loving husband. Josh made it a point to donate to the Ronald McDonald House Charities, and his favorite meal was a McDouble from McDonald's. Josh had a quirky sense of humor with a kind and warm heart, and he had the ability to make most people smile. He had a hunger for adventure, often thinking of grand ideas for the future. When Josh first visited Shonto, he fell in love with the peaceful community, and he decided that he would be his latest adventure. Gradually, Josh became an important part of the community as he was in the process of creating new businesses to offer support during the pandemic in the Navajo Nation. Through his actions, he demonstrated his impressive instinct for business. Josh was a man of many talents, and he approached life with humor and his favorite beer, "Natural Light". We already miss his enthralling military stories and silly jokes. Not only did we admire his determination, but we also hope to carry on his spirit. Joshua was a loving husband, wonderful son, great big brother, fantastic uncle and loved by many. He is survived by Rodale Cooley (husband), Debbie Virginia Wyatt (mother), Douglas Wayne Long (father), Amy Virginia Long (sister), Anna (niece), John (nephew), Sara (niece), Donald "Jason" Long (brother), Whitney Long (sister-in-law), Sarah Beth (niece), Emmie Kate (niece), Cash (nephew), Rosalie Grass (mother-in-law), RoseMarie Grass (grandmother-in-law), Jones Grass (grandfather-in-law), Bilveena Bowman (sister-in-law), Lanagan Bowman (brother-in-law), Rodylan Cooley (brother-in-law), Nicole Calamity (sister-in-law), Donovan Sneezer (brother-in-law), Sherrilyn Sneezer (sister-in-law) and Andrew Shipman (brother-in-law)."