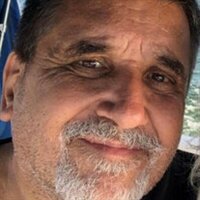 Christopher D. Cordeiro, 58, of Avondale, Arizona passed away on Thursday, June 10, 2021, surrounded by his loving wife Laura and his three children. Christopher was born in Fall River, Massachusetts. The son of the late David Cordeiro and Theresa (Soares) Entin and her husband Jeffrey Entin of Berkley, MA. He then and later moved to Phoenix, Arizona in 1981. Christopher began a career of carpet cleaning and would later start his own business C & J Carpet Care. He had a passion of being outdoors on the water with his wife and showing off his 2015 Dodge RT Challenger "Lady Mistress." Together they also enjoyed working on their cars and going to many different car shows, which is how they met. He belonged to the car group, Challenger Demons and was known as 'The Burnout King'. He had a heart of gold that would light up the room but was also known to be a jokester. Christopher received a second chance at life on March 7, 2013 via a liver transplant. We all were blessed with eight more wonderful years with him. He was a loving Son, Husband, Father, and Tata that will be deeply missed. Survivors include his wife, mother and stepfather and three children: Jamie M. Smith of Phoenix, Natosha J. Cooper of Buckeye, and Joshua D. Cordeiro of Tolleson; a sister: Elizabeth Voss of Somerset; grandchildren: Victor, Ellyanna, Angel and Luna; along with many nephews. He was the grandson of the late Antone and Angelina Soares and Manuel and Elvira Cordeiro.